Getting and using data from the PCT

The PCT is not only a web tool, it is a research and open data project that has resulted in many megabytes of valuable data (Lovelace et al. 2017). This guide was put together to show how to download and use these open datasets, originally for the Cycle Active City 2021 conference, although it may be of use to anyone interested in data driven planning for sustainable and active travel futures. If you are following this guide as part of the Cycle City Active City 2021 conference, the workshops are scheduled at the following times:

1 Getting and exploring PCT data

In this section you will learn about the open datasets provided by the PCT project and how to use them. While the most common use of the PCT is via the interactive web application hosted at www.pct.bike, there is much value in downloading the data, e.g. to identify existing cycling infrastructure in close proximity to routes with high potential, and to help identify roads in need of interventions from a safety perspective, using data from the constantly evolving and community-driven global geographic database OpenStreetMap (OSM) (Barrington-Leigh and Millard-Ball 2017).

In this session, which assumes you have experience using QGIS or R, you will learn how to:

In this example we will use data from North Yorkshire, an area with urban areas surrounding York and many rural areas. You can use the PCT, which works at the regional level, for North Yorkshire or any other region by clicking on the area you’re interested in on the main map at https://www.pct.bike. If you know the URL of the region you’re interested in, you can navigate straight there, in this case by typing in on clicking on the link https://www.pct.bike/m/?r=north-yorkshire.

From there you will see a map showing the region. Before you download and use PCT data, it is worth exploring it on the PCT web app.

Exercise: explore the current level and distribution of cycling:

You can use the little-known ‘Freeze Lines’ functionality in the PCT’s web app to identify the zone origin and destinations of trips that would use improvements in a particular place. You can do this by selecting the Fast Routes option from the Cycling Flows menu, zooming into the area of interest Bridge, and then clicking on the Freeze Lines checkbox to prevent the selected routes from moving when you zoom back out.

Figure 1.1: Areas that may benefit from improved cycle provision on Clifton Bridge, according to the PCT.

1.2 Downloading data from the PCT in GeoJSON form

On the PCT web app Click on the Region data tab, shown in the top of Figure 1.1, just beneath the ‘north’ in the URL. You should see a web page like that shown in Figure 1.2, which highlights the Region data table alongside the Map, Region stats, National Data, Manual, and About page links.

In this section we assume you have a recent version of QGIS installed and have some experience using this popular and powerful free and open source desktop GIS software.1 Open QGIS and create a new project and name it pctdemo.

Once in the project, open the three layers you downloaded in the previous section. You should see something resembling the screenshot shown in Figure 1.3.2 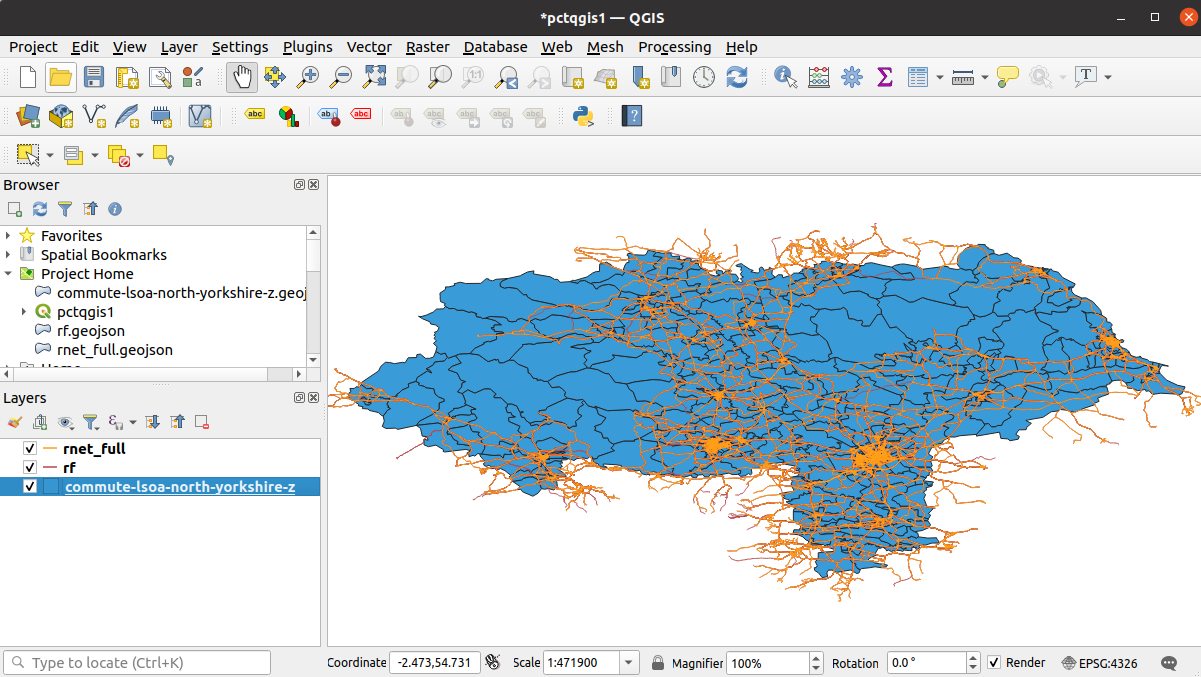 After you have the data in QGIS as shown in Figure 1.3 a wide range of analysis options are opened up. We can only cover a few of these in here, due to space and time constraints, and it is worth being guided by local policy priorities rather than the technology to ensure useful (not just attractive or eye-catching) results. One major issue that is apparent in Figure 1.3 is that the zones seem squashed.3 We can deal with this by changing the coordinate reference system (CRS) of the map visualisation. It may also be worth reprojecting the data, to the official projected CRS in the UK: EPSG:27700. Undertake these tasks in the exercises below:

Find all the fast routes that intersect with a 10 m buffer surrounding Clifton Bridge (note: this is a time consuming task).4

Don’t worry if you do not have time to complete each of the steps needed to find the result. You can see how it works by opening the project pctqgis3.qgz in the pctqgis.zip file. The result should look something like the screenshot shown in Figure 1.4.

Figure 1.4: All fast routes that intersect with Clifton Bridge in QGIS.

Bonus: How many km of cycling per day could improvement to Clifton Bridge benefit?

Advanced: What interventions would you recommend on Clifton Bridge? Your answer can be based on the analysis presented above, StreetView (see the bridge at goo.gl/maps/Zeq76RnZ9ENRWCsE6) local knowledge and other factors.

1.5 Identifying gaps in the network

This section assumes you have data on the regional cycle network. For the purposes of this worked example, we used a broad definition of ‘cycle infrastructure’ based on research undertaken at the University of Heidelberg. Using this definition, a cycle infrastructure layer was extracted from OSM using R. The data was exported from R into the cycle_infra_projected.gpkg, which is provided in the pctqgis.zip file mentioned in the previous sections.

In this section we will load the cycle infrastructure layer, buffer it, and undertake a geographic operation to identify places where there are gaps in the network.

1.6 Getting PCT data with R

We will get the same PCT datasets as in previous sections but using the R interface. If you have not already done so, you will need to install the R packages we will use for this section (and the next) by typing and executing the following command in the R console: install.packages("pct", "sf", "dplyr", "tmap").

The PCT provides a school route network layer that can be especially important when planning cycling interventions in residential areas (Goodman et al. 2019). Due to the sensitive nature of school data, we cannot make route or OD data level data available. However, the PCT provides travel to school data at zone and route network levels, as shown in Figure 1.6. (Note: to get this data from the PCT website you must select School travel in the Trip purpose menu before clicking on Region data.)

As we will see in Section 3, combining school and commute network data can result in a more comprehensive network.

Figure 1.6: Open access data on cycling to school potential from the PCT, at zone (left) and route network (right) levels. These datasets can support planning interventions, especially ‘safe routes to school’ and interventions in residential areas. To see the source code that generates these plots, see the ‘source’ link at the top of the page.

This section is designed for people with experience with the PCT and cycling uptake estimates who want to learn more about how uptake models work and how to generate new scenarios of change. Reproducible and open R code will be used to demonstrate the concepts so knowledge of R or other programming languages is recommended but not essential, as there will be conceptual exercises covering the factors linked to mode shift. In it you will:

To undertake the exercises in this section you need to have R and RStudio installed, as outlined here. Load the packages by running each of the lines of code in the code chunk beginning with library(pct) (which loads the pct R package, making its functions available) in the previous section 1.6.

To complete the exercises in this workshop your also need to have imported PCT data into your R session, by running each line of code in the code chunk beginning region_name = "north-yorkshire" in the previous section.

Finally, we will use these additional packages, which you must have installed on your computer for the code below to work:

(#fig:dutch_pcycle)Percent cycling currently (left) and under a ‘Go Dutch’ scenario (right) in the North Yorkshire.

Let’s develop a simple model representing the government’s aim, that “half of all journeys in towns and cities \[will be\] cycled or walked” by 2030. We will assume that this means that all journeys made in urban areas, as defined by the Office for National Statistics, will be made by these active modes. We only have commute data in the data we downloaded, but this is a good proxy for mode share overall.

The first stage is to identify urban areas in North Yorkshire. We use data from the House of Commons Research Briefing on City and Town Classifications to define areas based on their town/city status. The code chunk below shows the benefits of R in terms of being able to get and join data onto the route data we have been using:

After the classification dataset has been joined, the proportion of trips made by walking and cycling in towns and cities across North Yorkshire can be calculated as follows.

Currently, only around 34% of commute trips in the region’s ‘town’ areas are made by walking and cycling (27% across all zones in North Yorkshire, and a much lower proportion in terms of distance). We explore this in more detail by looking at the relationship between trip distance and mode share, in Figure 2.2 (left). We will create a scenario representing the outcome of policies that incentivise people to replace car trips with walking and cycling, focussing on the red boxes in Figure 2.2. The scenario will replace 50% of car trips of less than 1 km with walking and 10% of trips between 1 km and 2 km in distance. The remaining car trips will be replaced by cycling, with the percentages of trips that switch for each OD determined by the uptake function in the Go Dutch Scenario of the PCT, resulting in the right graphic shown in Figure 2.2.

The scenario outlined above may sound ambitious, but it only just meets the government’s aim for walking and cycling to account for 50% of trips in Town and Cities, at least when looking exclusively at single stage commutes in a single region. Furthermore, while the scenario represents a ~200% (3 fold) increase in the total distance travelled by active modes, it only results in a 17% reduction in car km driven in towns. The overall impact on energy use, resource consumption and emissions is much lower for the region overall, including rural areas.

In the context of the government’s aim of fully decarbonising the economy by 2050, the analysis above suggests that more stringent measures focussing on long distance trips, which account for the majority of emissions, may be needed. However, it is still useful to see where there is greatest potential for car trips to be replaced by walking and cycling, as shown in Figure 2.3.

Figure 2.3: Illustration of route network based on car trips that could be replaced by bicycle trips, based on Census data on car trips to work and the Go Dutch uptake function used in the PCT.

In this section we will create a new scenario called Go York, representing what would happen if people were as likely to cycle as people in York are, for a given trip distance and hilliness. The first step is to subset zones and OD pairs originating in York.5

We can train an uptake model based on this subset of the routes as follows:

We can then use this model to project cycling levels across the whole region.

PCT is not limited to commuter data only, PCT also provides a range of school data for each region in England and Wales to be downloaded with relative ease. In the example below, we add a purpose to the get_pct_rnet() function of school. This allows us to get estimates of cycling potential on the road network for school trips, commuter trips, and school and commuter trips combined. Note in the figure below that the combined route network provides a more comprehensive (yet still incomplete) overview of cycling potential in the study region.