This vignette supports workshops on advanced usage and development of the Propensity to Cycle Tool (PCT). Beginner and intermediate PCT events focus on using the PCT via the web application hosted at www.pct.bike and the data provided by the PCT in QGIS.

The focus here is on analysing cycling potential in the open source statistical programming language R, in which the majority of the PCT was built. It will show how the code underlying the PCT works, how the underlying data can be accessed for reproducible analysis, and how the methods can be used to generate new scenarios of cycling uptake.

If you are an intermediate user, it may be worth brushing-up on your R skills, e.g. by taking a free online course such as that provided by DataCamp or by working through Chapter 2 onwards of the open source book Geocomputation with R (see reading list below for more transport-specific resources).

To ensure your computer is ready for the course, you should be able to run the following lines of R code on your computer:

To test your computer is ready to work with PCT data in R, try running the following command:

If the new method does not work or you would like to be more hands on, run the code below. It should result in the map below, showing the % of short trips in Isle of Wight made by active modes.

We can also use the data to explore entrenched car dependence, as follows:

Break and presentation of results

How the PCT works and what you can use it for 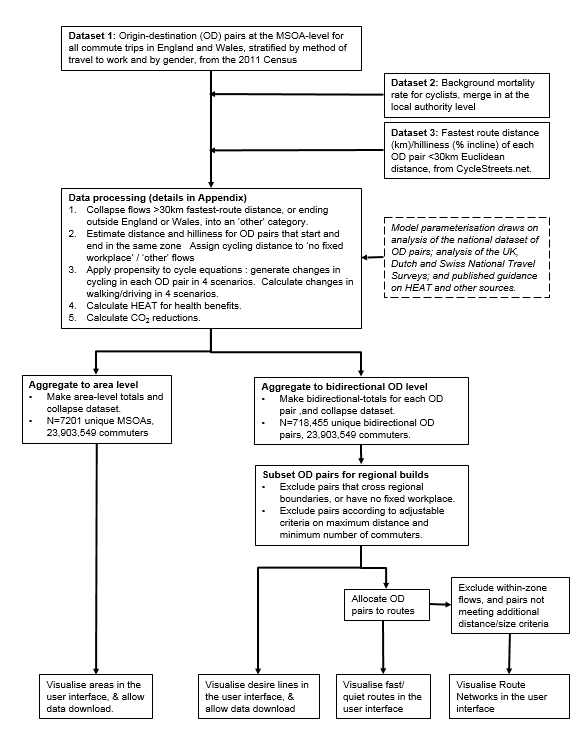 Which types of data are most appropriate to tackle each of the questions/problems you identified?

Getting and viewing PCT data

Top 5 MSOA to MSOA desire lines with highest number of people cycling (left) and driving (right) in the Isle of Wight.

Top 5 LSOA-LSOA desire lines with highest number of people cycling (left) and driving (right) in the Isle of Wight.

Top 300 LSOA-LSOA desire lines with highest number of people cycling (left) and driving (right) in the Isle of Wight.

Percent cycling currently (left) and under a ‘Go Dutch’ scenario (right) in the Isle of Wight.

Ideas for further work and a ‘minihack’